Page 3: are these her words about Our Boys?

Sam (22, from Manchester) is reportedly delighted that our armed forces are to be honoured with The Sun Military Awards and says:

"We should all remember the sacrifices they make for us every day." 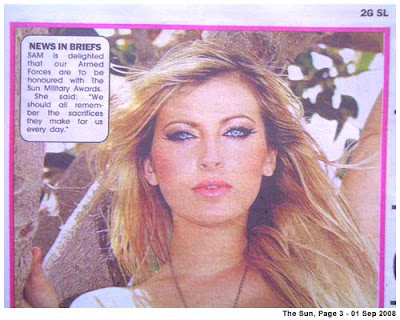 Some efficient wordage from Sam there; her statement could be taken to apply to sacrifices that are made every day and/or that we must remember those sacrifices every day (be they daily or otherwise).

Assuming, of course, that these words came directly from Sam.

Now, I want to make clear here that we are not saying that having a pretty face and a nice set of tits means that you have no brain. I am instead saying that it seems rather fortuitous that the girl selected as today's Page 3 model has decided to express a positive view on one of the matters that editor Rebekah Wade has uppermost in her mind today:

"We are proudly launching The Sun Military Awards — to be known as The Millies — in honour of our brave boys and girls. Charles spoke of his own concerns as a parent after seeing Prince Harry go to war. And he called on the nation to show gratitude for the courage shown and sacrifices made on its behalf."

"Our annual awards ceremony — the first exclusively for the Armed Forces — will highlight the awe-inspiring bravery of these amazing men and women... It is vital to our troops fighting abroad that the public back home are rooting for them. Our annual Millies will, we hope, send them that message loud and clear."

I'll leave to one side how pleased Prince Charles must with the support shown on Page 3 and that this campaign is certainly about 'Our Boys' and not 'Our Circulation' and , because I wish to return to my central point:

Gosh, isn't Rebekah wade *lucky* that the girl scheduled to appear on Page 3 today was so on board with the idea, so comfortable about speaking about it, and so damn eloquent in her delivery?

One can only wonder what happens when the girl scheduled to appear on any given day holds an opinion contrary to the editorial line on the lead story (assuming that this has ever happened, because I've never seen it).

Does she get to choose another story to comment on (in the hope that her opinion on that is more in keeping with the editorial line), or does she lose her chance to appear that day?

In other words, how much say do the Page 3 girls have in what they say on Page 3?

"The Millies"? Jesus wept, what kind of soldier would want to win one of those? I mean, isn't there such a thing as dignity?

What the soldiers would probably appreciate more than an award of this kind, would be not to be sent to other peoples wars on a lie.

Now, let me think *strokes chin* who wanted to go to war in Iraq...?