The Sun reports on a legal case:

A GALLERY which exhibited a statue of Jesus Christ with an erection is facing court today charged with outraging public decency.

The artwork was part of an exhibition at Baltic Centre for Contemporary Art in Gateshead, Tyne and Wear, which featured dozens of plaster figures including Mickey Mouse, ET, and Jesus - all with erections.

The prosecution, as has been widely reported, is being brought by a certain Emily Mapfuwa of Brentwood, who claims that the image causes "harassment, alarm and distress to the public", and that therefore its display should be banned as a matter of public order. The police have declined to proceed, so Mapfuwa is undertaking a private prosecution with the backing of the Christian Legal Centre. The Sun gives no details about what exactly the CLC is: it is of course an off-shoot of the Lawyers' Christian Fellowship, and it is run by Andrea Williams, a close associate of Nadine Dorries MP. As I blogged here, Williams has previously represented Andrew McClintock, a magistrate who says he was forced to resign due to his opposition to gay adoption, and Lydia Playford, the schoolgirl who fought for the right to wear a “Silver Ring Thing” “purity” ring at school.

The offending piece of art is by Terence Koh (the self-proclaimed "Naomi Campbell of the Art World"), and it is part of an installation entitled Gone, Yet Still. The installation was displayed in Austria in 2005, and there were no reports then of "harassment, alarm and distress". Here is the "Jesus" element of the series:

This is not, though, the image that appears on the Sun's website. Instead - and as Unity of Ministry of Truth has pointed out - a previous Sun article on the subject carries this image, which has been reproduced elsewhere: 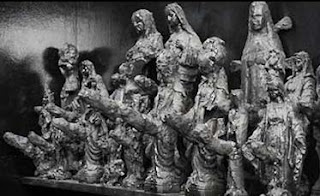 With some help from MediaWatchWatch, Unity tells us that this photo actually shows part of Medusa, another piece by the rather phallus-obsessed Koh (see his website), and which was withdrawn from the Saatchi Gallery in 2006. Unity notes that "several news sources suggest...that [Mapfuwa] complained after reading about the statue in a newspaper". But what if her complaint was based on the wrong picture? Unity suggests that

Pretty much the first thing that the Baltic Exchange’s lawyers need to be doing when this case gets to court is sorting out whether or not Mapfuwa is trying to prosecute them over the actual statute they had on display or The Sun’s fake photo...

The prosecution is, of course, an attempt to ban alleged "blasphemy" by other means, following the recent repeal of blasphemy laws in the UK. According to ArtInfo:

Mapfuwa reportedly intends to cite a 1990 case in which an artist and shop owner were convicted of offending public decency for showing a sculpture made of fetuses.

An informative blogger named Matthew Hunt adds some historical context in a 2006 posting:

Tumescent Christs have caused artistic controversies before, including a Belgian sculptor's prosecution for blasphemy in 1988. Also, Danish artist Jens Jorgen Thorsen painted a tumescent Christ on the wall of a railway station in 1984. A series of three paintings (Man Of Sorrows, circa 1530) by Maaten VanHeemskerck depict Christ in a similar state, as discussed in Leo Steinberg's book The Sexuality Of Christ In Renaissance Art & In Modern Oblivion.