On 9 December, the Sun claimed that a live episode of Coronation Street to be broadcast later that day was subject to a threat from Al-Qaeda: 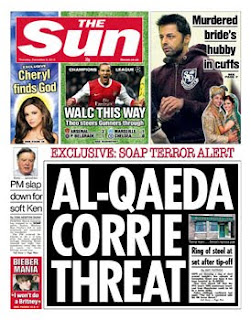 Cops are throwing a ring of steel around tonight's live episode of Coronation Street over fears it has been targeted by AL-QAEDA.

They were tipped off that the ITV1 soap's historic 50th anniversary broadcast from Manchester could be hit by a terror strike.

The article (an 'exclusive') went on to include several suspiciously vague quotes from suspiciously anonymous sources. It just didn't sound right. Nothing in the story convincingly backed up the 'Al-Qaeda threat' claim.

And within hours of the paper hitting the shelves, Supt. Jim Liggett of Greater Manchester Police confirmed the story was complete rubbish:

"I want to clarify that we have categorically not been made aware of any threat from Al-Qaeda or any other proscribed organisation.

"Quite simply, Granada approached GMP to inform us they were employing a private security firm to help ensure tonight's live programme went ahead without outside interference.

"As part of their operation they asked for police assistance and we agreed to deploy a very small number of officers and PCSOs to help patrol the set's perimeter fence.

"This small police operation will be paid for by Granada and will not cost taxpayers a extra penny.

"To reiterate there is no specific intelligence threat to Coronation Street or any such event. However, the UK threat level remains at severe and people are encouraged to be vigilant."

Inevitably, the episode went by without being disrupted by Al-Qaeda or anyone else, as many hours of live television do every day.

So it was unsurprising to see the Sun publish an apology for the story on 28 December:

Further to our article about increased security at Coronation Street's studios for their live 50th anniversary episode (December 9), we would like to make clear that while cast and crew were subject to full body searches, there was no specific threat from Al-Qaeda as we reported. We apologise for the misunderstanding and are happy to set the record straight.

Those two sentences appeared on page two. Given the prominence of the original, surely they should have appeared on the front page?

(The above combines two posts from Tabloid Watch)
Posted by MacGuffin at 11:25:00 am No comments:

Does the left hand know what the right hand's doing at the Sun? You have to ask based on today's incredibly familiar editorial attacking the same old "Leftie union dinosaurs" it's been fulminating against for over 20 years:

UNION brothers nibble mince pies at No10 with David Cameron.

The PM wants to defuse tensions over spending cuts. Asking the TUC round was a friendly, constructive step.

But some union barons are hell bent on trouble. Rabid Leftie Len McCluskey, new boss of Unite, calls for war against the Government.

He orders union members to "prepare for battle" and praises "magnificent" student demonstrators who brought mayhem to London.

The Sun does not believe sensible Unite members want sickening violence and vandalism of the sort we have recently seen.

Do turkeys vote for Christmas?

If the leader writer had bothered to read the paper's own article on the meeting, they would have already known the answer:

And if that doesn't count as "personally slapping down" McCluskey, then the actual statement from Miliband's spokesman should make clear that was exactly what he intends to do:

Ed warned about using overblown rhetoric about strikes in his conference speech and this is a case in point. The language and tone of Len McCluskey’s comments are wrong and unhelpful and Ed Miliband will be making that clear when he meets him in the near future.

Still, why bother with small things like accurately representing the leader of the Labour party when portraying him as a cartoon character is so much more amusing?
Posted by septicisle at 11:04:00 pm No comments: