The lies surrounding the reporting

Virginia Wheeler was sent by the Sun to report Gary Glitters return home.

Virginia Wheeler of The Sun:

I SHUDDERED as creepy Gary Glitter stroked my arm and called me “sweetie” yesterday.

The pop pervert sat by me on a flight from Ho Chi Minh City to Bangkok after being released from a Vietnamese jail.

Paedophile Glitter, who insisted he was heading back to Britain, ran a hand along my arm and said: “Tell me, sweetie, what is the weather like in England? I’m not used to the cold any more. I’ve got so used to the heat in Asia.”

Oh. Did he, now? Paul Gadd said that to you, Virginia?

I copied the following from the scan below because it needs to appear in searches. I can be vindictive like that sometimes.

A SENSATIONAL scoop for Sun hack Virginia Wheeler on August 20: "WORLD EXCLUSIVE. Perv Glitter is free and tells the Sun:I'm Coming Home."
Wheeler described how she "shuddered as creepy Gary Glitter stroked my arm and called me 'sweetie' yesterday" but nobly endured his attentions in the interests of a world exclusive. And it was well worth it: the peripatetic paedo revealed his plans to resume a music career and his fears that the English weather might seem a little chilly after three years in a Vietnamese jail.
Where did this encounter between beauty and the beast occur? "The pop pervert sat beside me on a flight from Ho Chi Minh City to Bangkok," Wheeler claimed. Strange, then, that in the accompanying photos of Glitter on the plain from Vietnam to Thailand there was no sign of Wheeler in the next seat.
She was, in fact, sitting in the front row of business class while Glitter was much further back. About 10 minutes before landing, the crew moved him forward to a vacant t seat so he could make a quick getaway from the press posse. He was put three rows behind Wheeler - still quite a distance from which to fondle her arm. None of the hacks on the plane saw him touch her or speak to her at all.
Even so, Wheeler filed her "world exclusive" to Wapping. After reading what Glitter himself had allegedly told her - "I'm so glad to be going back to England...It's where my heart is and where my family are. I can't wait to see them" - the newsdesk ordered her to get on the Bangkok-to-London flight without delay as he was sure to be on it. While other hacks waited to see what happened, Wheeler duly checked in and boarded. Alas! Glitter stayed in Bangkok, feigning illness and trying desperately trying to avoid going anywhere near England.
The Sun hastily recruited a freelance to cover the ensuing shenanigans while Wheeler commenced her 12-hour flight back to Blighty. 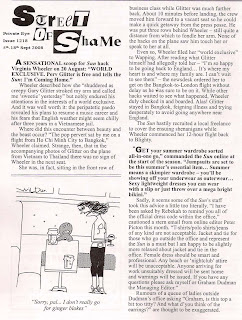 Gary Glitter is a monster. With freakishly long arms.

PS - Good call on the text reproduction. Totally called for.