Did "Labour double kids on the sick"?

The Left Foot Forward blog has performed a masterly take down on the Sun's incredibly misleading "Labour doubled kids on the sick" article from today. It comments on the headline:

A misleading conflation of Disability Living Allowance, which is not an out-of-work benefit, with Incapacity Benefit/Employment Support Allowance: less than half of young DLA claimants receive IB or ESA.

And goes on to present the actual data so you can judge for yourself whether the rise in the numbers claiming since 1997 has been justified or not on the basis of the conditions those receiving the benefit have. It concludes with:

There is a line between selective presentation of data which makes the case for a particular policy, which is legitimate, and suppressing details in order to encourage gross misinterpretation of the evidence, which isn’t. Today’s Sun story is on the wrong side of that line.

The Sun also commented on the story in its leader, presented below in full as the paper's editorials are not archived:

DID Britain's young people get sicker under Labour?

Labour encouraged people to claim a handout for ailments as slight as an allergy. The bill is now an incredible £12billion a year - equal to Britain's entire transport budget.

No wonder the Coalition wants urgent health assessments. This has to end.

What Olly Mann claims about Page 3 in this podcast (starting 00:21:25) is pretty much what most informed people suspect, and the contempt for the 'girls' adds to the air of authenticity:

"I've asked my source at News International [with regard to the 'News in Briefs' editorials on Page 3 in The Sun]... and my source says the deputy editor who's in charge of Page 3 decides the topic and then one of the subs writes it. The girls have nothing whatsoever to do with it, because apart from the one with a degree*, they're as daft they look." - Olly Mann (Source: Answer Me This podcast, Ep 168, February 24, 2011 - relevant audio starting 00:21:25)

The editorial staff at The Sun have gone through long periods of pretending that editorials on Page 3 are a harmless joke, but they cannot do this without dismissing their own politics as a joke.

If there must be editorial content on Page 3, then it should be clearly labelled as opinion (not news) and it should always be the heartfelt, unprompted opinion of the model in question.

Anything less is a lie to readers that exploits these women in the worst possible way.

If Page 3 is their platform, where is their voice?

(*Psst! 'The one with a degree' is Sam Cooke, and her editorials raise similar questions. A 'models are dumb' argument on Page 3 is a needless detour ending in a shallow cul-de-sac.)
Posted by Tim at 1:18:00 pm No comments:

The Case of the Disappearing News Stories

Simon at No Rock and Roll Fun has spotted The Sun trying to cover their tracks and avoid hypocrasy with regards to publishing photos of Kai Rooney in light of the attempted blackmail of Wayne and Colleen...

The Sun is full of sympathy:

Frantic Coleen called the venue from their home in Prestbury, Cheshire, but the camera could not be found. Someone tried to sell the photos to media outlets, who turned them down.
[...]
A Rooneys spokesman said: "Wayne and Coleen take their son's privacy very seriously."
The paper even takes care to pixelate the face of the small child in a photo used to illustrate the story.

What do you mean, is there a whiff of hypocrisy here? Why, no, for The Sun has never run photos of the child unpixelated. Why, even if you thought they might have done, someone has quietly removed all the pages from the archive where, for example, they might have published a curiously-obtained photo of Kai visiting Father Christmas. Sure, the URL - http://cma.thesun.co.uk/sol/homepage/news/3265032/Wayne-and-Coleen-Rooneys-son-Kai-visits-Santas-Grotto.html - still exists, but there's nothing on the page.

Nobody can point a finger.

(If/when the items are removed from the Suns' search index, Simon has a screeshot at his post.)
Posted by Sim-O at 11:34:00 am 1 comment: 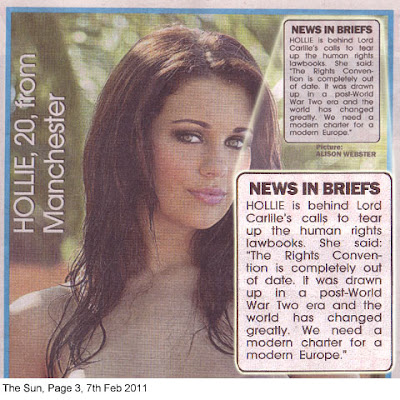 If the women on Page 3 are to appear beside an editorial that's written in their name, then it should be written by them and based on their own opinion. Anything less is crass exploitation, even if they don't show their tits in the process.
Posted by Tim at 7:50:00 am 4 comments: