Failing to extract the rafter from their own eye.

When there's not a lot of news about, journalists with pages to fill and editors to appease can fall back on one of those hardy perennials: revisiting an old story or banging out a highly similar successor.

The Sun has today done just that. Back at the beginning of July the Sun "exposed" a bunch of teens brandishing weapons in photographs they had posted on the social networking site Bebo. The problems with the article were obvious: we had to take the Sun's word that these images had indeed been on Bebo, as the site admins had removed them after being alerted by the Sun; and that they featured teens in this country.

Today's collection is much the same, albeit with less photographs than the effort in July. It features the same idiotic immature little children pretending to be men by posing with weapons about three times their size of their penises, and with the same lack of proof that such images were on Bebo, with no screen grabs and little chance of finding the profiles with much of the information provided. Thankfully however, the name of one of those featured is "Ironiik Starr", which is somewhat unique and gives us something to go on. His profile seems to still exist, although there is no picture corresponding with one presented by the Sun. He does however have two other images featuring baseball bats and guns, but trades that off by featuring an anti-gun crime song on his profile.

More interesting though is the other results which a quick Google of Ironik Starr gives us. Mr Starr has a profile on another social networking site, MySpace, owned by none other than the same parent company of the Sun. Like with his Bebo profile, there's no images of guns here. We do however have a link to another member of the group of which he's a member, a certain Hektiiq Starr. His profile is far more interesting: his background is an image of the character from the Hitman games, his add me box features two handguns, and lo and behold, his gallery contains this self-portrait: 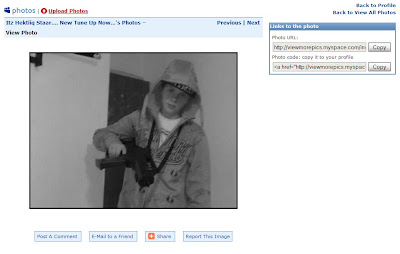 Could this possibly be the image which the Sun describes in its piece as:

"The profile of a wannabe gangster called Ironiik Starr, from Luton, Beds, included a snap of a boy of no more than 12 with a sub-machine gun."

It just might be, mightn't it? Only it's on MySpace as well (Hektiqq Starr's profile on Bebo with the picture as his main photograph is here). The Sun probably hasn't featured this photograph because it's pretty apparent, even to someone like me with no knowledge of guns whatsoever, that this "sub-machine gun" is either a toy or an Airsoft rifle.

It does however prove the wider point: that focusing on one social-networking site, in this case Bebo, is wholly unfair when all of them contain much the same content from the self-same absorbed little gangs that will most likely grow out of waving weapons at cameras. To do a proper expose of this sort of posturing, if it would be worth the effort, would cover all the networks with examples from all of them, which are fairly easy to find. The Sun however can't do this, because criticising MySpace is something it simply can't do. It instead picks on a rival while at the same time continuing to perpetuate the nonsense of "Broken Britain". Considering that Bebo has been doing much more than MySpace to try to understand and combat knife and gun crime, the site might well want to consider whether it wants to make clear both the Sun's hypocrisy and its conflict of interest. And indeed, they might want to ask Patrick Mercer whether he think the Sun's sister company's hosting of the same material he was asked to condemn is also "deeply irresponsible".
Posted by septicisle at 10:32:00 pm

A cracking piece, this.

The pictures are obviously not of the same person. The same article was in a local news paper and it is pretty obvious that ironiik's real nae is jack and hektiiq's real name is craig. Its not to hard to track them down. Plus the picture is still on bebo just on their band "grimme creatures" and hektiiqs band of himself. It only took me 5 minutes to work all of this out. THe boys are also obviously 14 not 12 as it says so on their profiles and that gun is so obviously a toy.