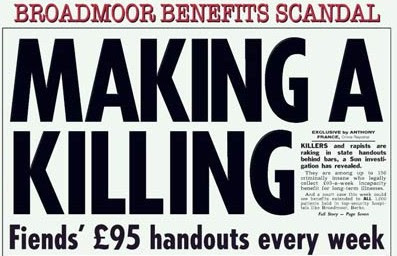 On occasion, even I get blown away by the sheer sophistry of tabloid stories. Today's front page Sun splash is one of those:

"KILLERS and rapists can pick up as much state money as a victim’s grieving mum, The Sun can reveal.

The clue here to this story being a concocted outrage is in "detained under the Mental Health Act". (Also worth noting is that despite the intro claiming that killers and rapists can receive incapacity benefit, the Sun doesn't deign to mention any that do, for the simple reason that none of those actually convicted of doing so can.)

As the article goes on, after long quotations from "sources" from high security hospitals:

"The patients claiming cash include some of Britain’s most violent people — but have NOT been convicted of a crime and are entitled to long-term sickness benefit."

Yep, that's right, none of these individuals which the Sun is claiming receive incapacity benefit have been actually convicted of a crime and sent to either Broadmoor, Rampton or Ashworth as a result - instead they're being detained indefinitely under the Mental Health Act because they're either a danger to themselves or to others. They are therefore considered to be ordinary hospital in-patients, and can apply and receive normal benefits as everyone else can. You can argue that since they're being in effect cared for by the state that they should be paying for their board and food, but since the individual has little to no responsibility whatsoever for being unfortunate enough to develop either a mental illness or a personality disorder, it's hardly an open and shut case.

The actual real point of this invented so-called scandal though is to flag up another case that would genuinely be one:

"But a High Court case brought yesterday on legal aid by a convicted murderer and a rapist could allow handouts to virtually ALL 1,000 patients in top security hospitals.

The pair, now in Broadmoor after being jailed for life in the 1980s, are taking on the Department for Work and Pensions — and say they should be entitled to a “full range” of benefits.

Suddenly it all makes sense. In order to justify splashing this situation which might develop on the front page, the Sun's had to throw together information already in the public domain, call it "MAKING A KILLING" and in the process attempt to build its readers up into a familiar state of apoplexy. With this now done, the paper can defend itself if any complaints are made regarding its use of some familiar monsters: 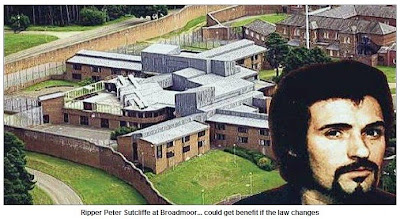 Another secure hospital, Ashworth on Merseyside, is where Moors child murderer Ian Brady is held. None of those currently gets benefit."

All three of course have been convicted and sentenced to life imprisonment, hence why they cannot apply for benefit. All three though are pictured as though they're just waiting to fill their boots; after all, why not kill someone, pretend you're insane and get incapacity benefit? The streets will shortly be littered with corpses!

The cynicism behind this really is quite breathtaking. After a week in which the neoliberal economic orthodoxy which the Sun has long espoused has been shown to be rotten to its very core, the paper's still more concerned with demonising individuals not convicted of any crime for daring to claim £95 a week. Take the Sun's claims at face value, with 150 in-patients receiving that all year-round, and it means it costs the taxpayer a whopping £741,000 a year, or the tiniest drop in an immense ocean. This is considered to be more important than anything else today, and in effect, it is. The paper knows full well this was going to go down a storm, and the comments on the story, many getting the impression that Sutcliffe and others are already getting incapacity benefit show it.

Even worse is the Sun's leader:

"BENEFIT handouts to psychopaths responsible for horrific crimes are an outrage.

It may be legal, through a loophole in welfare laws. But it is morally repugnant."

Except that no one actually convicted of a crime is receiving benefit, as the story makes clear. But why even bother telling the truth? The article itself barely bothers.

"A Sun investigation reveals how some of our most dangerous murderers and rapists are claiming £85 weekly incapacity benefit."

Only it can't name a single one which is. Whoever wrote this is too lazy to even get the actual sum in question right.

"Now two Broadmoor patients are claiming even more benefits, taking their weekly income to around £120."

Another bare-faced lie as the article makes clear. They are bringing a case; they are not claiming it yet, nor is it likely they will win.

"Under the law, secure hospital patients qualify for handouts as “long-term sick”.

We are sick, too, if we allow this to continue."

Some might suggest that individuals that repeatedly lie and distort for their own short-term gain are also suffering from personality disorders; they though it seems will continue be remunerated on a far greater scale than anyone currently residing in a hospital.


P.S.
And some other bloggers wonder whether sites such as this are necessary and think it rare that the tabloids "flat-out" lie.
Posted by septicisle at 9:31:00 pm

Well, I appreciate the link - but this post backs up my point.

There isn't a "flat-out lie" anywhere to be seen. Yes, it's pretty heavily spun, but heavy spin and a flat-out lie are not the same thing.

My dad is one of these "violent psychos" AND is in a secure hospital ...AND he gets £87 a week incapacity benefit.
I feel so guilty and ashamed...But what can I do? He has a disability a bit like Alzheimer's Disease called Fronto-temporal lobe dementia. He was sectioned under the mental health act as he is a danger to himself. He is 57 - working age! What a scrounger! Maybe he sould make a break for it and save the tax-payer from having to support his 5 star luxury lifestyle on the unit... he's making a killing!