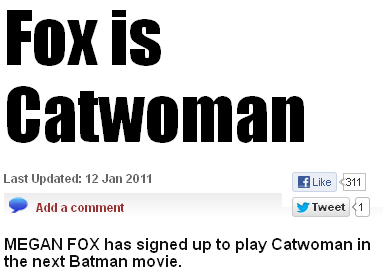 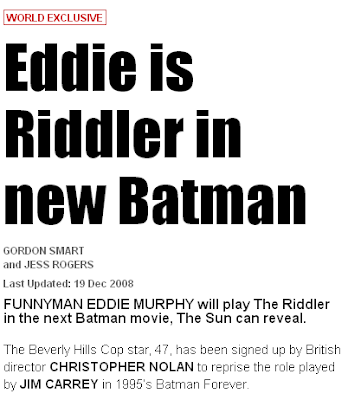 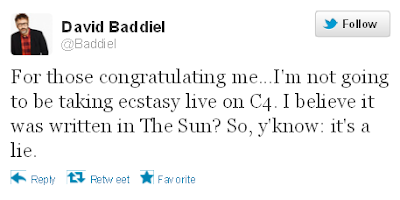 So after decades of implying if not assuming guilt on the basis of arrest if not suspicion alone (e.g. Forest Gate), The Sun have taken to defending... erm, themselves:

'Witch-hunt has put us behind ex-Soviet states on Press freedom'; The Sun’s Trevor Kavanagh on the biggest police operation in British criminal history

And to prove his point, here's Jeremy Hunt, the Culture Secretary of that supposed police state, playing lapdog for Murdoch (again) and pulling out all the stops to support this false prospectus, both in The Sun itself and in the wider media that he claims is under a threat all of a sudden now his chums at the Downing Street Echo are subject to arrest.

Earlier in the 'Hackgate' scandal, The Sun had their Page 3 girl deliver a special message to police. Now it's Trevor Kavanagh's turn to be a massive tit for Murdoch. His editorial self-serving rant is repeated in full below. We post it here and invite comment because The Sun have decided to disallow comments on their version. For some reason.

The Sun is not a "swamp" that needs draining.

Nor are those other great News International titles, The Times and The Sunday Times.

Yet in what would at any other time cause uproar in Parliament and among civil liberty and human rights campaigners, its journalists are being treated like members of an organised crime gang.

They are subjects of the biggest police operation in British criminal history — bigger even than the Pan Am Lockerbie murder probe.

Major crime investigations are on hold as 171 police are drafted in to run three separate operations.

In one raid, two officers revealed they had been pulled off an elite 11-man anti-terror squad trying to protect the Olympics from a mass suicide attack.

Instead of being called in for questioning, 30 journalists have been needlessly dragged from their beds in dawn raids, arrested and held in police cells while their homes are ransacked.

Wives and children have been humiliated as up to 20 officers at a time rip up floorboards and sift through intimate possessions, love letters and entirely private documents.

It is important that we do not jump to conclusions.

Nobody has been charged with any offence, still less tried or convicted.

Yet all are now on open-ended police bail, their lives disrupted and their careers on hold and potentially ruined.

Is it any surprise that Britain has dropped nine places to 28th, behind ex-Soviet bloc states Poland, Estonia and Slovakia, in the international Freedom of Speech league table?

So when the police get matters so far out of proportion, we are entitled to ask: Who polices the police?

Why should questions about police procedures be handled solely by the so-called Independent Police Complaints Commission, which is notoriously reluctant to rule against police?

This inquiry has even begun to disturb those of our critics who have been at least partly responsible for what many see as a "witch-hunt".

The Guardian has raised questions about freedom of the Press. Its media analyst, Steve Hewlett, says that when it comes to paying for stories, no newspaper — "tabloid or otherwise" — is exempt.

Yet in a quite extraordinary assumption of power, police are able to impose conditions not unlike those applied to suspected terrorists.

Under the draconian terms of police bail, many journalists are barred from speaking to each other. They are treated like threats to national security. And there is no end in sight to their ordeal.

Their alleged crimes? To act as journalists have acted on all newspapers through the ages, unearthing stories that shape our lives, often obstructed by those who prefer to operate behind closed doors.

These stories sometimes involve whistleblowers. Sometimes money changes hands. This has been standard procedure as long as newspapers have existed, here and abroad.

There is nothing disreputable about it. And, as far as we know at this point, nothing illegal.

Without good sources no newspaper could uncover scandals in the public interest.

Certainly, the world would never have learned about the expenses scandal that landed so many politicians in jail.

Which brings us to a sensitive domestic issue within the News International "family" which we cannot ignore.

It is absolutely right the company co-operates with police on inquiries ranging from phone and computer hacking to illegal payments.

We are right to hand over any evidence — emails, expense claims, memos — that might aid those inquiries.

It is right that those inquiries are carried out separately from the journalists under investigation. Nobody on The Sun was aware in advance that ten colleagues were about to be nabbed.

It is also important our parent company, News Corp, protects its reputation in the United States and the interests of its shareholders. But some of the greatest legends in Fleet Street have been held, at least on the basis of evidence so far revealed, for simply doing their jobs as journalists on behalf of the company.

Meanwhile, a huge operation driven by politicians threatens the very foundations of a free Press.

We have three separate police inquiries — Elveden, Weeting and Tuleta.

There is a Parliamentary inquiry and of course the free-ranging Leveson Inquiry into newspaper practices.

The field is open to almost anyone with a grievance to deliver their two cents' worth, even touching unrelated issues such as Page Three.

The process, costing tens of millions of pounds, threatens to roll on for at least another year and probably two.

Interestingly, nothing on this scale is envisaged for the banking industry which has brought the nation to the brink of bankruptcy.

Before it is too late, should we not be asking where all this is likely to lead? Will we have a better Press?

Or a Press that has been bullied by politicians into delivering what they, not the readers, think fit?

UPDATE - Just a quick note about The Sun comparing their situation to the uncovering of the expenses scandal (to the point where some cynics might suspect they seek to associate themselves with same in the eyes of the weak/lazy-minded...

The relevant source turned them down because they wanted to go soft on Cameron's Tories, and he did not think that appropriate. The Sun then acted in bad faith by publishing a story based on what was supposed to be a confidential authentication sample; they were clearly trying to cash in on the story before a real newspaper got to the evidence, and they did not care if their efforts derailed or undermined the publications of this evidence. With what little contact they did have with the expenses scandal, The Sun did not act in the public interest; they acted out of self-interest.
Posted by Tim at 9:14:00 am 5 comments:

The Sun, like most of the rest of the press, today notes the conviction of a certain Leonard Watters:

A JOBLESS dance teacher has been sentenced to six months in jail for falsely accusing X Factor judge Louis Walsh of groping him in a nightclub.Leonard Watters, 24, admitted making two false reports to police that the music mogul sexually assaulted him in Dublin nightspot Krystle.Father-of-two Watters — described as a "Walter Mitty" character — has apologised to Walsh, 59.Lawyer Cahir O'Higgins told Dublin District Court Watters is now a laughing stock and has been treated as a pariah in his home town Navan, Co Meath.The court heard Watters is penniless after blowing £670,000 compensation he received for serious burns.He was allowed bail pending an appeal against his sentence.

Strangely, the Sun doesn't feel fit to mention that this "Walter Mitty" character, now being treated as a laughing stock and a pariah had his initial version of events most prominently promoted by... the Sun. Indeed, after the investigation against him was dropped, Louis Walsh made clear that he was considering taking legal action against the paper for splashing Watters' allegations all over the front page.

His threat presumably resulted in this sort of clarification in the Sun the following day. Gordon Smart took one for the team and wrote an award winning piece of arslikhan, making clear how Walsh is variously "one of the nicest blokes in showbiz", "one of the most friendly, decent and warm characters I have met in the music industry" and also that "he hasn't got a bad bone in his body — even after a big drink". Nonetheless, "[T]he Sun's duty is to report that news. It's our role to ask the difficult questions."

This ought to have been something both Dominic Mohan and Smart could have been asked about at the Leveson inquiry, yet for some reason both were at best, very lightly grilled. Still, plenty of time left for them to be recalled.