The Sun even lies about its birthdays

As reported here (and repeated here), The Sun started life as the Daily Herald in January 1911, as "a strike sheet for the London printing unions, then involved in an industrial dispute, to support their pleas for improved pay and conditions" (see: irony) before formalising its activity as a regular, daily newspaper from April 15th 1912 (pdf/source). It then went on to relaunch as an independent broadsheet titled The Sun on 15 September 1964. It was then bought by Rupert Murdoch and relaunched (again) in 17 November 1969 (more).

If these birthday/anniversary celebrations are really about 40 years of Rupert Murdoch, then by all means, let's wheel the old bastard out so we can stick some candles in him. 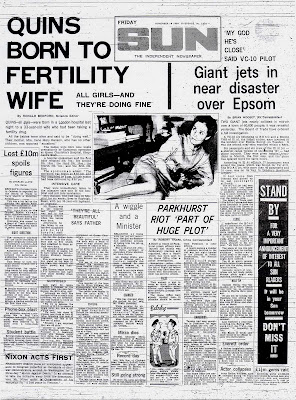 A copy of the front page of The Sun from 14 November, 1969. Click to enlarge. (Note the Orwellian announcement in the sidebar, promising some impending doubleplusgood news of the uppermost importance.)

UPDATE - Do check out this tasty bit of audio hosted over at Chicken Yoghurt.
Posted by Tim at 12:11:00 pm

There's a lot of words on that page.

How did they manage to find the time to research it all, too?

'This video is no longer available due to a copyright claim by News International Limited.'

It's not ours, but thanks for the heads-up.

No worries Tim. Love this blog by the way. I have been lurking around for ages.

I used to wonder if any blogs such as this existed before because I got fed up with all the lies from The Scum! I came across this blog and might I say you are doing a wonderful job.

Cheers Dark, but it must be said that Sim-O, D-Notice and Septicisle especially have been doing most of the heavy lifting.

They are all doing a good job!

Keep it up guys!