Even when they're being nice...

The Sun today carried a story about the five British soldiers. There's nothing controversial about it. It just an article about the soldiers and some of the relatives that have to pick up the pieces after losing a loved one.

But even when The Sun is being nice and sensitive it still can't help but have a little dig.

One of the soldiers, Warrant Officer Darren Chant, was expecting to become a father again with his wife Nausheen.

As you could guess, Nausheen is not a typical British name. Nausheen, according the article, is a non-practising Muslim. I do not know her and non-practising means different things to different people, but looking at the pictures published in the paper of her marriage, a white Christian wedding, it looks like she is not a Muslim at all. Nausheen's parents may be, but that doesn't mean she is.

And here's the bit that's got me. In the article there is only one reference to Nausheen being a Muslim. It is referred to in a casual way. In a way that newspapers refer to people's jobs, "John, a carpenter from Wilsdon...". That isn't a problem, especially in this type of story. It adds a bit of background, helps you to know the people in it, to empathise with them (although it doesn't mention anyone else's religion, practising or otherwise).

The point is Nausheen's religion is such a small part of the story, it's inconsequential.

So why the headline on the front page of the print edition and the trail on the website of... 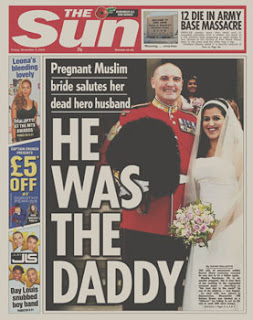 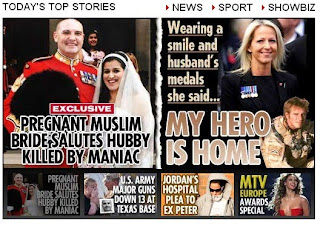 Why add the word 'Muslim'? The fact that Nausheen is a Muslim, however dedicated, is not central to the article, it is irrelevant. The Sun doesn't add other peoples religion to headlines or stories when it has no bearing on it, so why in this case? Isn't this type of thing normally reserved for derogatory use?

I am not saying the Sun can't mention peoples ethnicity or religion, as I said earlier, it's bit of background, a bit of colour in the picture. To stick it in the headline when it has no relevance at all, especially with the Suns' previous with Muslims, it's well, maybe they just stuck it in with out thinking, eh?
Posted by Sim-O at 9:15:00 pm