Only just been alerted (ht: John B) to a rather famous Sun front page which never was: the Mine Fuhrer Arthur Scargill front page from the height of the miners' strike in 1984, courtesy of the-sauce: 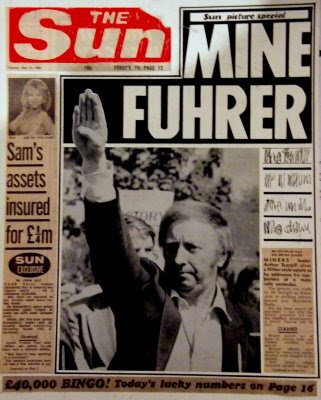 It never saw the light of day thanks to the production chapels mass-refusing to set it - something which Murdoch and MacKenzie ensured would never happen again when News International moved to Wapping two years later, smashing the print unions, something which continues to be contentious to this day. 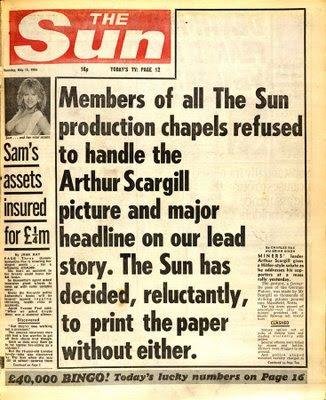 Do have to disagree with John B's additional comments, therefore, that "printworkers shouldn't have a veto over editorial content, however vile." The old motto is "publish and be damned", but if say the printworkers could have blocked "THE TRUTH", as they perhaps could have done had the unions not been crushed, it would have certainly prevented additional pain being piled upon an already grieving city. They would have been the only ones capable of keeping MacKenzie in check - something which the hacks themselves either couldn't or were unwilling to do. More recently it has still taken union power rather than individual power to stop the Daily Star from running a "Daily Fatwa" page, which promised a page 3 lovely in a niqab, while the union reps on the same paper complained also to the Press Complaints Commission that they were under pressure to write "anti-gypsy" reports. Overruling the editorial staff when they go too far, by threatening strike action if necessary, is better than the alternative.
Posted by septicisle at 9:57:00 pm

I know it's old news, literally, but on a human level, credit to the printers' unions for refusing to have anything to do with that front page.

As for the notion that they should have nought to do with the editorial line, well, would you say that if there was a printers' strike in Nazi Germany, or the old USSR, or dictatorial China?

Would you stand by the local equivalent of Murdoch or by the printers putting their neck in it as they stand up to propaganda and lies?

Claude - that idot Scargill walked right into it. It wasn't libelous, they told no lies. But hey-ho, Thatcher won, the unions were crushed and have never recovered.

@SamSmith
The coverage of the strike by the Murdoch press was a string of lies from start to finish, jusy as today they lie about public sector strikes.

While I believe you should do the job you get paid to do, not sure I would have went along with something so inflammatory of a brother union.
ICYW, I think unions, for the most part, have outlived their purpose. But there are still professional courtesies union and management should extend to one another.