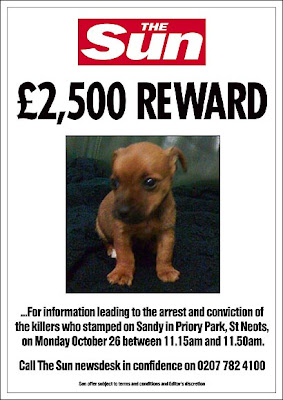 Via the inestimable Tabloid Watch, I note that the puppy meant to have stamped to death by yobs has been found to have, err, in fact died of a virus. The Express wasn't the only paper to declare this a huge story: the Sun also felt sufficiently angered by it to offer a reward of £2,500 to anyone who helped catch those responsible. The first person to call the news desk with the good news and then ask for the reward will be, err, suitably rewarded.

Facebook has, predictably, fallen over and played dead. It's signed up with the IWF, probably because it knows full well that the organisation doesn't "drive out perverts" as the Sun seems to imagine it does.

The Sun's editorial team have arrived rather late to the nonsense surrounding Andrew Neather and the claim that somehow the immigration of the last few years was all a plot to create a multiracial hell-hole, but that doesn't make up for just how wrong it is:


That's because Downing Street whistleblower Andrew Neather has revealed that uncontrolled, mass immigration was a deliberate, covert policy cooked up by Mr Brown and Tony Blair to transform Britain into a multicultural melting-pot.

Err, except as Neather himself said:

"There was no plot," said Neather. He pinpointed a shift in immigration policy in 2001, when he wrote a speech for Roche outlining changes to make it easier for skilled workers to come to the UK. The speech followed a sensitive report on migration from the Downing Street performance and innovation unit.

"Multiculturalism was not the primary point of the report or the speech. The main goal was to allow in more migrant workers at a point when – hard as it is to imagine now – the booming economy was running up against skills shortages," Neather wrote in the Standard.

He admitted he had a sense from several discussions at the time that there was a subsidiary purpose of boosting diversity and undermining the right's opposition to multiculturalism, but Neather insisted it was not the main point at issue.

"Somehow this has become distorted by excitable rightwing newspaper columnists into being a 'plot' to make Britain multicultural. There was no plot. I've worked closely with Ms Roche and Jack Straw and they are both decent, honourable people who I respect … What's more both were robust on immigration when they needed to be. Straw had driven through a tough Immigration and Asylum Act in 1999 and Roche had braved particularly cruel flak from the left over asylum seekers."

The Sun has even further distorted Neather's original point into it somehow being Brown and Blair as the scheming geniuses behind this sinister plot. Obviously they can't imagine the average Sun reader will be able to recall Jack Straw, let alone Barbara Roche, which says a lot more about them that it does about their actual customers.

So when Mr Johnson admits it has caused a "strain" on jobs and public services, remember this:

It did NOT happen because Labour took its eye off the ball. It was done on purpose and in secret. The result was a catastrophe.

We used to have rely on Margaret Hodge to help the BNP. Now it seems the Sun is willing to take up the reins. And of course:

We have repeatedly voiced those views. But, like all opponents of Labour's lunatic open-door policy, we were branded "racist" and ignored.

Since nobody actually stamped on the puppy, they'll never have to pay a penny. Quality scam there.

I wish I could remember the comment thread (maybe Liberal Conspiracy...not sure?) where some pillocks were shouting "See? Even someone from within Labour was saying it as a deliberate ploy to turn Britain into a multicultural society".
Such crap was perpetrated by all the tabloids over days. It was probably read by tens of millions.
The disclaimer that the word "deliberate ploy" were never used will likely reach a few hundreds...

And then we moan that Nick Griffin goes on QT...