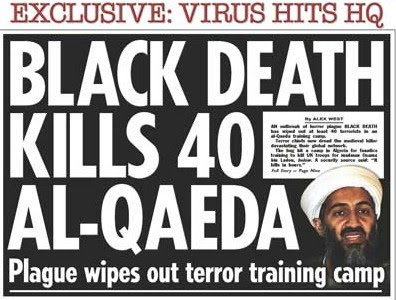 Imagine for a moment you're some sort of security asset. You have a major story: 40 militants linked to al-Qaida in the Islamic Mahgreb (formerly the Salafist Group for Preaching and Combat) have apparently died of the plague. Either they were the victims of diseases inherent to living in the middle of nowhere in Africa, where outbreaks of plague are still reasonably regular, or, more frighteningly, they were possibly experimenting with weaponising plague, and were struck down themselves in the process. Whatever the truth, it's still a reasonably big story. Who then do you leak this to? A well-respected newspaper, such as the Times, Telegraph or Guardian? Or, on the other hand, the Sun?

Silly question, really. As you might expect, the report splashed on today's Sun front page reeks to high heaven. All the signs that it's either propaganda or complete nonsense are apparent: firstly, that it's been handed to the newspaper over the weekend, to go in the paper on the slowest and generally least busy news day of the week, Monday. Second, it seems to be based on a single source. Third, it's a story which is completely impossible to verify: you could try talking to government health sources in Algeria and see if there have been any recent cases of plague reported to them or which they're aware of and go from them, but that's a lot of effort, especially for today's churnalists. Lastly, the actual details are sketchy while the background information is remarkably, for the Sun, rather well defined: it hasn't just described them as al-Qaida fighters but correctly as AQIM, it directly names the area where they were when apparently infected as Tizi Ouzou province, and where they apparently fled to, and names their leader correctly, even using his less well-known real name Abdelmalek Droudkal rather than his nom de guerre Abu Musab Abdel Wadoud.

In short, it provides you with everything except actual evidence. It claims that up to 40 were killed by the plague, yet apparently only one body was actually found, and rather conveniently by the roadside, while the others are meant to be in mass graves in Yakouren forest. There are no photographs, and no confirmation of what type of plague the man had died from. The article claims that plague can kill in hours, but this is only true of the rarest form, pneumonic plague, which if not treated within 24 hours of symptoms developing greatly increases the chances of death. Bubonic plague, the most common, can be treated, and due to its longer incubation period of 2 to 6 days and well-known symptoms is often identified in time. While all forms are increasingly rare in the West, there are still usually a few cases each year in the United States, a recent one of which killed a biologist in the Grand Canyon National Park in Arizona, apparently contracting pneumonic plague after performing an autopsy on a mountain lion.

Algeria last had a major outbreak in 2003, where there were a total of 11 confirmed cases and 7 suspected, all of bubonic plague with 2 later developing into septicemia. A later study trapped rats in the area of the outbreak and found 9 of the 95 fleas collected to be infected with Yersinia pestis. Despite this attesting that the country most likely still has such fleas and rats in abundance, especially in the apparent remote forest where the fighters were supposedly training, not to mention the possibility of it spreading from southern Africa where it is even more prevalent, all the far from paranoid self-cast jihad watchers have immediately jumped to the conclusion that this means they just must have been experimenting with plague as a weapon. The Sun has nobly followed-up such speculation in tomorrow's edition, with the paper contacting Dr Igor Khrupinov, of Georgia University, who immediately without the slightest of information further suggests this could be the case.

There are just a few problems with this. Firstly, if al-Qaida was experimenting with biological weapons again as it has very amateurishly done in the past, why would one of the least respected and smallest of its groups have been given the "contract" to do so? Moreover, plague is incredibly difficult to weaponise: the United States never managed it, although the Russians did. Famously, it has been used crudely in the past: first at Caffa and later by the Japanese, who dropped ceramic bombs filled with infected fleas on China in the early 1940s. The idea of weaponising plague, or at least bubonic plague has fallen down the list of feared outbreaks, mainly because of the relative ease with which it is treated. It would cause panic certainly, and some deaths most probably, but nothing on the scale of which al-Qaida would be interested in, especially considering the difficulties in spreading it in the wild. Pneumonic plague would be of more interest, especially if it could be spread by aerosol, but fears of its high infection rate have possibly been exaggerated: a study of an outbreak in Uganda in 2004 found a transmittance rate of only 8%. One of the authors had previously published a paper analysing the risk of person to person infection, which also appears to have come to a similar conclusion. That knocks the idea on the head of "suicide" infected walking around cities spreading the disease merely by coughing, and considering the quick onset of symptoms of pneumonic plague, also greatly reduces the time in which to spread it. That none of those involved apparently sought treatment gives the inclination that they were behaving deviously, but again that's if we believe that there are 40 bodies buried in a mass grave, when only 1 body has supposedly been definitively identified, with again no indication of the plague type.

If there was an outbreak then, and as could have been easily established by using the trusty Occam's razor, the most likely cause would have been our old friend Rattus rattus and his pals the fleas. It doesn't quite answer why they wouldn't have sought treatment, as not all of them would probably have been identified as militants, although they could have been "discouraged" from leaving.

That is of course if we accept the story at all. To return to the beginning, why would the Sun be given such a scoop? One answer might have been pay, naturally, not available from the more respected papers, but it still means that if it is completely false and instead an example of the tabloids being supplied with propaganda, that a significant minority, if not majority, are not going to believe a word of it. Why also has it been supplied now? When we last examined what seemed an almost certainly similar piece of unverifiable propaganda, it came at a time when the war in Afghanistan was going through a rough patch. Likewise, the threat from al-Qaida has been talked down of late, including by the head of MI5 himself. This doesn't suit the agenda of some politicians and security officials, who rely on the continuation of the "war on terror" or whatever name it is now masquearding as for both their own dubious ends and for their own employment. Only last week David Miliband was talking about the phrase "war on terror" being a mistake, something which the Sun itself denounced. It's also doubtless a coincidence that Barack Obama becomes US president tomorrow, and with it new policies on that very same war. Even better if the Sun itself doesn't immediately spin on how they might have been experimenting, with the outbreak being the result of weapons tests; let the jihadist watching blogs and forums do that.

Propaganda or not, the story has of course spread like the proverbial plague itself, all without anyone bothering to check it, although an article in the notoriously accurate Moonie-owned Washington Times is building on the story with another "intelligence source", claiming it was a weapons experiment that went wrong, which is helped by the article referring to the non-existent ricin plot without mentioning it being err, non-existent. Churnalism has done its work again, and because it spreads to more respected sites like the Torygraph, even if the story is based entirely on the Sun's original, it becomes more based in fact that it otherwise would. Either way, it's a good news story. Dead terrorists = good. Dead terrorists messing about with plague = good and SCARY, which is even better. The more you loathe the press, the more you come to respect its potential as a propaganda tool, and this article only furthers that.
Posted by septicisle at 11:59:00 pm