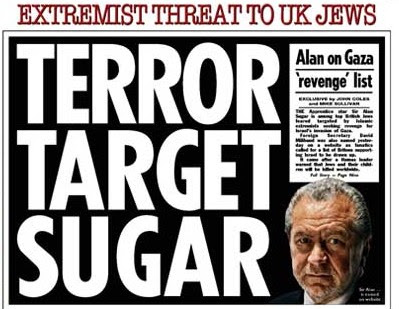 (A slightly edited version of the post on my blog.)

The Sun today has an exclusive: TERROR TARGET SUGAR their front page shrieks, with EXTREMIST THREAT TO UK JEWS in a banner above it. The online version of the article, which has a rather less hysterical headline with "[H]ate hit list", spells it out pretty clearly:

Here is the thread on ummah.com which the Sun article appears to be based on. It bares almost no resemblance whatsoever to the Sun or Jenvey's claims. The title of the topic is "[C]ompile a list of those who support Israel, started by saladin1970:

Asalamalykum, it seems that the time is right to compile a list of british people who support Israel

Ah yes, so what's being proposed on this "extremist" website is a deadly letter writing campaign. The thread itself was started on the 29th of December, and there wasn't exactly much headway made except in linking to lists on other websites. Suddenly, "abuislam" two days later bumped the thread up:

Have we got list of top jews and supporters yet we can target? can someone start posting names and addresses.

Saladin continues to link to a load of different pages, urging others on the forum to write to separate organisations to campaign against them, before abuislam suddenly pops up again and directly names some individuals:

Again, there's some further discussion but no indication of any protests that would involve anything other than private representation, until, wait for it, out comes abuislam at 7:31am yesterday with:

(QUOTE:It would be beneficial to start compiling a list so that we can write polite letters reminding them of the injustices of israel and to stop supporting israel ) polite will not work. Target them with Demo's out-side their Home's and Business hit and run demo's showing and exposing their war crimes in their support.

There where then no further posts until an admin posted on the Sun's story and locked the thread.

Ummah.com seems to have already looked into who "abuislam" was and quickly found some rather quite surprising details:

I can confirm that the User "AbuIslam" who was posing as a Muslim on this forum is infact a freelance Journalist by the name of "Richard Tims" who registered on this forum to twist what the original Intent of this thread was for and to make Muslims look bad. Whether he works for the sun or not i dont know.

It's obviously impossible to confirm ummah.com's claims, and a quick Google for Richard Tims doesn't turn up any obvious social networking profiles which would confirm there's a Richard Tims who describes himself as a hack, but on the surface the evidence does look rather damning; no one suggested anything other than a letter writing campaign or passing information on to other Muslim organisations for them to make representations, and very few actual names were mentioned until abuislam just happened to name some of the biggest used in the Sun's story, including Sugar and Miliband. Then, probably because even the Sun was going to have difficulties spinning a story out of absolutely nothing, abuislam finally suggested protests outside their homes and businesses, which even then suggests nothing other than unpleasant but within the law doorstep demonstrations.

There isn't even any out and out anti-semitism within the thread, although some will doubtless consider the targeting of individuals simply because they are Jews, regardless of their views on Israel, to be intimidating and most certainly counter-productive. As for the names the Sun mentions, Mark Ronson, Lord Levy and Anthony Julius were not so much as mentioned in the thread itself. They are however all entries on the Jewish Chronicle's list on the 100 most influential Jews, which was linked to on the thread.

Worth quoting is a section from Ummah.com's "press release", which attacks the Sun's article in no uncertain terms:

Examining the adjectives used in The Sun's article gives us an undeniable insight into their intent in publishing this piece; the words "hate", "hit list", "hate-filled", "extremists", "terrifyingly", "fanatics", and "deadly" all appear in the short article. The article mentions anti-Semitic attacks on Jews in Europe, quotes a statement from a figure in Al-Qaeda saying Muslims should attack targets wherever they can, alleges that Hamas call for the killing of Jewish children by saying Jewish people should be targeted anywhere and mentions attacks including an arson raid on a Synagogue. Discerning readers will be able to see this for what it is: a despicable attempt to paint law-abiding, Muslim peace activists - who are campaigning against Israel's actions - as criminal, murderous, anti-Semites, and terrorists. By using the language and imagery of hate and fear, they are instilling these feelings towards Muslims in the hearts and minds of their readers, and this has been an obvious feature of The Sun newspaper for many years.

Around the only accurate comment made in the article regarding the thread on the forum is that as Glen Jenvey says, it has in the past been used by extremists. Considering however that it is a wide open forum, where debate is not strenuously moderated, this is always likely, especially on the internet where intemperate and extreme comment are only a click away on any major forum. Some of those on it are quite clearly militant in their thinking: "kuffar" is used a number of times to describe those that aren't Muslims, alongside the usually illuminating remarks about the "illuminati" and "masons", and on the open press release thread one person has an Israeli flag combined with a swastika as an avatar, while others have avatars regarding the caliphate, potentially indicating support for Hizb-ut-Tahrir or other similar revivalist groupings, but none of this even begins to justify the Sun's twisting of the thread, or their outright scaremongering about the threats facing famous Jews in this country.

Some, like the Ummah.com press release, will further link this to the Sun's previous articles about Muslims, whether supposedly telling passengers on their buses to get off so they could pray or attacking the homes soldiers had looked at with the view to moving in as evidence of the paper's Islamophobia. To me it just looks like the Sun doing what it always does: twisting the truth as far as it can to create a "story" while not telling outright lies. That it will further inflame hatred against Muslims who were only proposing a letter writing campaign, and also scare Jewish individuals already concerned at the potential for attacks on them because of Israel's actions in Gaza is just an unfortunate by-product of the Sun's constant need to keep shifting copies and making money. Nothing else apart from that matters, and if other people get hurt, so be it.
Posted by septicisle at 11:59:00 pm

Dear sir, I have only been following your blog for a few weeks, and have not yet gone through your vast archives.

To be honest, at first I was a little disappointed, believing your blog to be little more than the same old nit-picking and generic anti-tabloid arguments that I've seen again and again.

Then this article turns up, completely changing my perspective.

I understand how tabloids, in fact all papers, exaggerate and embellish their stories. They have to in order to sell papers, they are businesses after all, but this goes far beyond simple exaggeration. This is nothing less than a terrifying example of dangerous fear-spreading hate mongering journalism.

Were I to spread this same story via pamphlets on the street outside my local library or university building, I have no doubt that I would I would be arrested, rather quickly, for several hate crimes and incitement charges.

This is truly horrifying, and I thank you for bringing it to my attention. I am now glad I didn't listen to my origional doubts of your website and stuck to it.

Thank you once again.

Kev raises an interesting point regarding editorial policy. We do risk turning people off if we do not stick to the clearest examples of outright deceit. Speaking as someone who loves documenting and drawing in wider detail, I know this will be hard to accept in some cases, but every editor is free to make longer posts on their own personal weblogs.

I'll make a promise here to schedule a discussion about this point (that was raised at the very launch of this site, but could do with some 'how are we doing so far?' input IMO) in the hope of bringing this thread back on topic after my little ramble.

I'm digging through some detail on this story this afternoon, having a closer look at some previous fishing expeditions by this same person using the 'abuislam' sock-puppet. I'll post a link here as soon as it's done.

"I understand how tabloids, in fact all papers, exaggerate and embellish their stories. They have to in order to sell papers, they are businesses after all, but this goes far beyond simple exaggeration."

I can see Mr Tomes' point; up to a point but would urge you to continue 'nit-picking' because I respectfully disagree that such falsehoods are unimportant.

Exaggeration and embelishment has become part of the journalistic DNA in this country and it's corrosive. OK, I can see that a one-sided kiss and tell on a premiership footballer is of far less importance than this story but dishonesty permeates at all levels and is worth pointing out.

It poisons the public space and should be challenged.

I used to work as journalist - at a very lowly level on a little local weekly. I never made anything up or misrepresented anyone but when I told people what I did they assumed I was an habitual liar in my work life. The worse we did was pushing things and across journalism there is a 'what can we get away with saying' culture - driven by competition with the worst offenders. You're even taught to write that way - never write £250,000 when you can write quarter-of-a-million, because it sounds bigger; if 30 people were involved in an incident write dozens because it sounds bigger.

I think they (I'm no longer a journalist) should be challenged wherever possible. Yes, they are businesses, but I believe newspapers even have some commercial priveliges granted by the state in defence of something that is important - a free and open press.

If I wanted to suggest an improvement to your site it would be to somehow get more in the papers' faces, really I just want your voices to be more widely heard.

CD: I agree with a lot of this, but the more we hone our focus on this particular tool, the sharper its edge will be. I'll make a post about it really soon, and all readers will be welcome to contribute.

Here's my breakdown of everything posted under 'abuislam' in the Ummah.com forums.

Quite revealing in places. The author is clearly posing as a Muslim, but at one stage they call someone who is obviously a woman 'brother'. Not entirely the same as posing as a Catholic and calling a Sister 'Father', but equally devastating as a giveaway.

The man behind the 'Richard Tims' mask is... the Sun's informant and quoted expert Glen Jenvey!