Cameron and Murdoch sitting in a tree.... 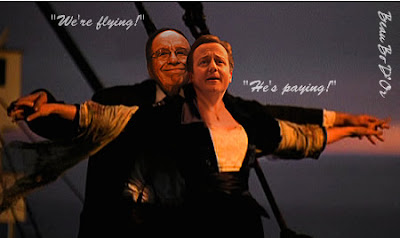 Courtesy Beau Bo D'or
David Cameron has never seen a bandwagon which he hasn't wanted to jump on. Accordingly, he just couldn't contain his thoughts on the whole Jonathan Ross/Russell Brand/Andrew Sachs debacle, and following the News of the Screws' feeble expose on BBC executive pay, he put pen to paper. Which newspaper though quickly decided his scribblings were worthy of publication? Why, that would be the Sun.

Just a couple of weeks ago after all we learned that Cameron had, thanks to Murdoch's son-in-law, visited Rupert himself on his yacht prior to jetting off on holiday. Whilst registering this in the members interests, he somehow forgot to mention he was going to see Murdoch himself. Still, these things can slip the memory.

If there was some sort of deal done on the floating fortress between Murdoch and Cameron, and the Sun's apparent swift praise for Cameron's conference speech suggests there may well have been, then Cameron's article isn't completely overwhelming in its sycophancy towards Murdoch's interests. He is if anything perhaps overly defensive of the BBC, including its current methods of funding, and whilst paying lip service to the idea that the corporation is biased, you have to wonder if his heart's fully in it.

One of the big points he makes though is over the pay issue, and how Mark Thompson, the BBC's director general, earns over £800,000 a year. As I point out in a somewhat extended version of this post, this is less than his ITV and Channel 4 equivalents earn by quite some margin. How much though, for example, is Rebekah Wade paid? Answer: we don't know, as the Sun is one of the few newspapers which doesn't have its pay deals fully open to scrutiny, unlike the Daily Mail, where Paul Dacre has previously earned well over a £1 million for his stewardship of the paper. Wade is reputed to earn less, but is it less than Thompson? Perhaps a clue is provided by how much James Murdoch, Rupe's son, is paid by BSkyB (PDF). In 2008 he received roughly £1,357,000, down from almost £3 million the year before after he stepped down from being CEO to become a non-executive chairman, having effectively taken over from his father his role as head of News Corp in Europe, or at least in this country.

The other obvious point to make is that the BBC stands in the way of Murdoch's complete domination of the media in this country, hence why it so loathes the corporation and is attacked by Murdoch's interests at every opportunity. For Cameron to have received Murdoch's apparent backing, he will have had to have guaranteed to not harm Murdoch's business interests, and also to be prepared to intervene on Murdoch's behalf if necessary, as it was revealed at the weekend Blair did. While Cameron will then have not gone anywhere near as far as Murdoch would have liked him to, Cameron still can't burn his bridges with the corporation until he is in a position where it won't make any further difference. Today's article will almost certainly be a further step towards Cameron gaining the affections of one of the few people who really matter, and the fact that he isn't even a British citizen and does all he can to pay as little tax in this country as possible doesn't matter one jot.
Posted by septicisle at 11:59:00 pm