The Sun at the fringe. 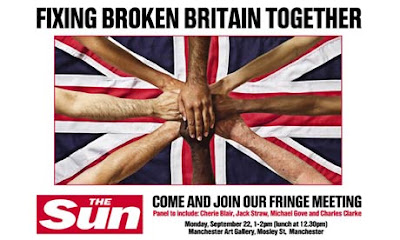 Being one of the supposed politics editors on the Sun Lies blog is difficult for one short reason: the paper very rarely actually "does" politics. This doesn't mean that the Sun doesn't feature political stories; that it does. Rather, the Sun presumes that its readers aren't interested in politics as reported by say, any of the ex-broadsheets, but they are interested in policies, albeit ones which the Sun pre-decides they should be interested in and that have already been defined by the editorial team themselves. Hence the Liberal Democrats hardly receive any coverage at all, except when they're mocked or insulted; they are an irrelevance. When it comes to crime and law and order however, that's something the Sun knows its readers deeply care about. They deeply care so much about what their readers think about law and order that they provide the exact remedy which they themselves think would solve all our problems in a flash. Whether the readers actually agree or not is something entirely different.

It's therefore well worth pointing out that this year, for the first time ever, the Sun newspaper has been holding fringe events at the Labour and Conservative party conferences. These have long been dominated by the broads, holding stiflingly boring meetings with stiflingly boring politicians, never meeting a real actual person except the delegates themselves who turn up and become stiflingly bored as a result. They deserve something approaching credit for this, because the Guardian for example has been holding truly dismal sideshows where politicians make the case for their greatest ever respective member. No surprises to learn that Labour voted for Keir Hardie while the Tories chose Margaret Thatcher.

The theme of the events, in case you couldn't guess, is "Broken Britain", the Sun's now long-running theme on how the country bends over backwards to allow every armed chav to knife crime your son/daughter/husband in the face while the police and judiciary doing everything in their power to instead persecute the victims. I exaggerate slightly, but only slightly. There's no dispute that we have endemic, deep problems, especially in some of our inner cities, with gangs, crime, drugs and poverty, both of aspiration and wealth. The toll of teenage lives in London is undoubtedly sickening. There are however no quick solutions to any of these things, and the constant demands for immediate action, of which the paper never supplies any real point plan except to rip up the Human Rights Act and install zero tolerance only increases the chances of bad policy being made on the hoof. Politicians shouldn't give in to such demands, it's true, but the relationship between the media and the government has become so essential to the management of every day life that now those in powers have little choice but to take heed.

The first of these meetings, at Labour's conference last week, did not actually go especially smoothly from the Sun's point of view. Only one member of the actual panel - Michael Gove of the Conservatives - unsurprisingly considering the party's own views, agreed with the Sun that the country is "broken". Just so that the argument was not completely lost, the newspaper took the precaution of arranging for the relatives of those recently involved in some of the most notorious murder cases to be in attendance. Perfectly acceptable, of course, but what is not is the idea that this was their first opportunity to speak out or speak to politicians, nor was it all thanks to the Sun. It also distorts the true picture of crime, which almost everyone agrees has now fallen for the past decade, with rises in certain offences, but with the chances of becoming a victim of crime actually the lowest since the early 80s. The Sun never though has any intentions of being representative.

I've written previously about the tyranny of grief, the power of emotion and how it is almost unanswerable without coming across as ill-feeling or not grasping the full scale of what has happened to the individual - and the Sun knows this perfectly well. Politicians can do nothing but spout platitudes, pretend to feel their pain, and all it does is come across as false, which is because it is. It is impossible to know how they feel without having experienced a similar tragedy. Overwhelmingly though, emotion and anger are not good starting points to make policy from. This is obvious when you read what some of these traumatised individuals want to be done:

"In an impassioned plea she called for tougher sentencing, more police patrols and earlier action to identify potential yobs.

Brooke [Kinsella, whose brother Ben was stabbed to death], who later met Prime Minister Gordon Brown, added: “We need to get through at the grassroots. We need to get these kids before they even think about committing a crime.”

And just how exactly do you do that? Without exactly the kind of nanny statism and surveillance which is so decried, especially by the Sun, how are you meant to identify those likely to commit crime before they even think of doing it?

Apart from back-slapping, about the only real controversy at the Labour meeting was that Cherie Blair and Jack Straw clashed over why George Michael had only received a caution for possessing crack cocaine.

More stormy was yesterday's at the Conservative party conference. Like at the first, there was the outpourings which if anything suggest that some of those still involved ought to be attempting to move on:

"Marcia Shakespeare – whose daughter Letisha, 17, died in Birmingham gang gunfire – said: “The police try their best but what about the rights of victims? I don’t get answers to my job applications because I am stigmatised as the mother of a murder victim.”

I'm not sure that the government can be blamed for someone continuing to in effect stigmatise themselves.

The headline though was the merely inscrutable:

"VIOLENT thugs who kill and maim should forfeit their human rights, The Sun’s crime summit was told yesterday.

Paul, joined by Sally’s mum Linda, told the meeting: “In this country animals have animal rights and a dog has every right to be treated well and kept healthy. If that dog decides to act outside what we regard as acceptable – for instance bites a child – its rights are taken away and it is destroyed.

“When somebody decides, like the perpetrator of the crime against Sally, to go out armed with a knife to murder, leave it till the coast is clear and then rape, bite and desecrate the body of an 18-year-old girl, I believe that man’s human rights should be waived to a degree."

When then should someone lose their human rights? When they're accused of the crime? After they've been convicted? After a number of appeals? And what exactly is an inhuman act? How will we define it? The Human Rights Act has never affected the Sally Anne Bowman case in any shape or form: Mark Dixie is appealing against his conviction, but considering that the case against him was almost as straight-forward as they come, he's hardly likely to succeed. With a minimum sentence of 34 years passed, he'll be 70 before he can apply for parole. It sometimes has to be asked: how much more do they honestly expect the state to do? Bowman supports the death penalty, but you only have to look to America to see that it is no deterrent, especially against crimes such as those committed by Dixie, and it simply is not going to be brought back, however much a minority would like it to be.

There also seems to be a complete lack of perspective of what prison life is actually like, especially for those who commit crimes like Dixie:

If worry-free is getting beaten up, excrement and spit put in your food and being in constant fear, then you have to wonder what sort of regime would be preferred. It hardly seems like Dixie will flourish in prison - the police officers who arrested him after an altercation in a bar were surprised he was crying over such a minor incident, until the DNA results came back.

It was again though the involvement of Blair which made headlines outside the Sun, with Cherie quite rightly calling the Tory MP Chris Grayling "specious" for offering the ripping up of the HRA as some sort of solution. The Tory pledge to bring in a British bill of rights has always been a joke, as all repealing the HRA would do is mean that applicants would have to appeal to the European Court of Human Rights rather than a British court, as the Tories would hardly be likely to withdraw from that institution also.

The Sun's job though had been done. It's presented, via those who have suffered the most from indiscriminate violence which can almost never be wholly prevented, the same simplistic solutions which it has been pushing from the very beginning. It points to Bill Bratton and his success in bringing down violent crime in New York and Los Angeles without mentioning that the number of murders in both those cities is far higher than the toll in London. It doesn't mention that part of what helped bring down crime in those cities, apart from zero tolerance, was the crime mapping that has just been recently introduced in London. He's quite right about the targets which do burden the police, and possibly about local accountability, but that also raises the spectre especially over here of the BNP effectively seizing control of neighbourhood policing. It also completely ignored the aspects of the debate which it rather wouldn't present to its readers, such as Blair's strong defence of the HRA, and Jonathan Aitken, along with Charles Clarke, robustly denouncing the Titan prisons plan which the Sun supports, as it does any prison enlargement. This is how the Sun's politics works: it comes to a predefined conclusion and sells at as if that was the one that was came to naturally. And that's partly why the newspaper has such control over politicians as a whole.
Posted by septicisle at 11:57:00 pm

"“When somebody decides, like the perpetrator of the crime against Sally, to go out armed with a knife to murder, leave it till the coast is clear and then rape, bite and desecrate the body of an 18-year-old girl, I believe that man’s human rights should be waived to a degree."

Um we already do that, it's called being sent to prison. It kind of removes your right to freedom of movement and assembly somewhat.

I understand that Cherie Blair was heckled and interrupted by various family members of victims to the point where she was unable to continue. I'm no great fan of Mrs Blair but she is a respected human rights lawyer and it would have been worthwhile to hear her views.

The problem with involving victims and their families is that (with notable exceptions) they want vengeance not justice. It would appear that our, caring, sharing Sun would also like to see Courts of Vengeance.