The day the Sun went back to the Tories? 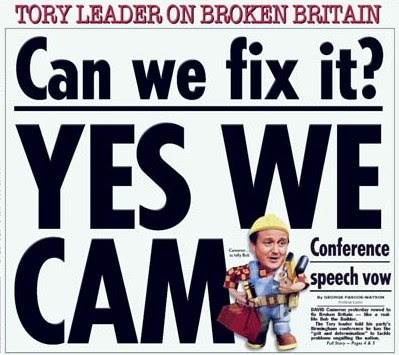 Incredibly positive coverage of Cameron's speech, not just on the front page, but also in the paper. Perhaps this, from the report on the speech, was key:

"Everything in Mr Cameron’s 64-minute speech smacked of a Thatcherite agenda, from strong defence to an end to the PC culture."

About the only note of criticism is from "5 Daves" which the paper called upon to comment on the speech.

Key though, as always, is the Sun's leader (url may well change):

"DAVID Cameron finally stood up yesterday and showed what he is made of.

Gone was the show pony politician. In his place emerged a tough leader, a young but credible statesman with potent ideas for rebuilding our nation.

Mr Cameron said the words his party wanted to hear. He echoed their hero, Margaret Thatcher, calling for “strong defence, sound money and the rule of law”.

But it will be the reaction of Sun readers that counts in the end.

This speech could have been lifted straight from a Sun editorial — from backing Our Boys on the front-line to mending Britain’s broken society.

The perfect example of the Sun telling its readers what they want, when in fact, as the preceding sentence so vividly illustrates, this in what the Sun wants.

"A Tory government will call a referendum on the hated EU Constitution. It will end the abuse of the EU Human Rights Act and replace it with a sensible bill of rights."

How many times has the Sun repeatedly told this bare-faced lie? The Human Rights Act and the European Convention of Human Rights, on which it is based, have nothing to do with the European Union, and pre-dates our joining of the EEC, the fore-runner of the EU, by 23 years. One cannot wait to see what a "sensible" bill of rights will contain that the "abusive" HRA with its quaint rights to life, a fair trial, liberty and security, expression and marriage doesn't.

"This was a powerful, coherent speech, addressing hard economic questions with sensible solutions.

Far from looking like a “novice”, Mr Cameron delivered the most confident and compelling speech of the political season.

“You can’t PROVE you are ready to be Prime Minister — it would be arrogant to pretend you can,” said Mr Cameron.

And he’s right. The Tory Party has come a long way under his leadership. There is much still to be done.

But with this nail-hammering performance, he showed he is more than qualified to give it a try."

Cameron has then passed the Sun, or rather, the Murdoch test: by so adopting their own editorial line, it's clear that he poses no threat to them or to Murdoch's business interests, hence he is now qualified to potentially be our prime minister. Those who object that one person, indeed, an Australian American, has such power to decide who is and isn't fit for government in the United Kingdom, ought to be worried: the last time this happened we were lumbered with Tony Blair for 10 years.
Posted by septicisle at 9:45:00 pm