A reverse ferret to rival Diana.

At times it's worth casting your mind back and taking stock of just how much difference a couple of years can make. The Sun's editorial from the 19th of January 2007:

TONIGHT is a moment of truth for Britain.

Out of nowhere, a Channel 4 show watched by a few million has erupted from being a bit of a laugh to a defining moment in the way Britain is seen by the rest of the world.

Make no mistake. Much more hangs on tonight’s Celebrity Big Brother eviction vote than the issue of whether Jade Goody or Shilpa Shetty stays in the house.

At stake is whether we are happy to be seen as a nation willing to tolerate vile bullying and foul-mouthed yobbishness.

That is why The Sun urges every reader who loves Britain to pick up a phone and make sure the ghastly Jade Goody is kicked out tonight.

The argument will continue to rage over whether Jade and her moronic mates are guilty of racism.

But no one can dispute that we are witnessing some of the most degrading and repugnant scenes ever broadcast on British television ? and last night’s unconvincing peace-making between Goody and Shilpa did nothing to change that.

And the following day's:

SANITY has prevailed. Thank Heaven for that. Jade Goody went into the Big Brother house appearing to be simply a fun-loving working-class girl canny enough to have made millions from her 15 minutes of fame. It was all a meticulously manufactured lie. She has left the house with her true personality laid bare: A vile, pig-ignorant, racist bully consumed by envy of a woman of superior intelligence, beauty and class. Incredible as it may seem, last night’s vote was the most important in Britain since the last General Election. OK, it’s just a reality TV show. But it became a referendum on whether our nation, with the eyes of the world on us, was prepared to back a home-grown yob over a dignified Indian actress. We weren’t and the result has restored faith in the British public. Hopefully Jade will now slither back under the rock from where she crawled before her debut on Big Brother in 2002. As for her two spineless, sniggering sidekicks ... let’s hope they join her.

Back then to today: 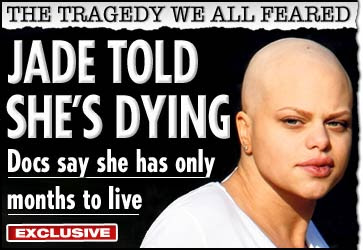 From slithering back under the rock to the tragedy we all feared in just more than 24 months. Even by tabloid standards of attention span, this must be a reverse ferret that's close to rivalling the one following the death of Diana.
Posted by septicisle at 11:07:00 pm

comfy socks and a bottle of rum said...

That was the week the whole of the UK decided en masse that racial discrimination was wrong. My aunt an avid reader of The Sun, voted twice, cheeky. Contacted members of the family, and friends. We all did our bit, and voted. Bloggers spent hours composing rousing bits for their readers, and those readers to a man agreed that this would show the world we were really very nice people indeed, and we felt good about it. Two weeks after aunty had cast her vote (twice) a letter arrived, it purported to be from an Asian family who were buying the house next door, the house next door was indeed up for sale. The writer went into great detail of how many children, wives, and cattle he would be bringing. Aunty put the house up for sale (true), wrote to the papers, started a petition, and arranged to have extra locks fitted. It was a joke needless to say, never ever found out who sent the letter, but loads of good folk who had voted with The Sun and aunty that day, also now supported aunty. Aunty is still with us, 96 and still as lovable as she has always been. Don't blame The Sun all the time, on this one we were all guilty, we all feel sorry for blaming one person for our own prejudices, ask aunty won't you, this time we were the nasty people.

I support this site... but this is a little crass mate. The "tragedy we all feared" simply refers to Jade Goody dying. Now I have no time for the skank but I don't wish death on her for a second. I think the tragedy is the fact her kids are going to be growing up without their Mother.

Err...anyone with common sense didn't attack Jade Goody because her thinking represents a vast swath of the UK and also if you want someone like that on show, you should accept their personal foilbles.

But rather the Sun attacked without mercy, even though they run bigoted stories and then as soon as she is terribly ill and dying, they pump her PR guff.

I've been sick in my mouth but what's more alarming is the people who visit here to defend the Sun against will formulated and concise arguments.

And why is this the 'Tragedy we all feared'?
Who is this 'we'? Why do 'we' fear Jade dying?

No one is attacking Jade, here, it is the the Sun's reversal of opinion and its' projection and exaggeration of emotion that is under scrutiny.

So it's more of a circling ferret.

or maybe a zig-zag

I also remember that during the Big Brother thing, although Jade was the loudest, Danielle Lloyd said some of the worst things about Shilpa, such as the enlightened gem "why don't she just fuck off home". I don't remember The Sun mounting a sustained vile campaign against her.