Let's begin with some comments from the Sun's discussion boards yesterday:

"They're clearly all dole scrounging students with nothing better to do but doing drugs and trying to be 'groovy'..."

"These people like to call themselves anachists...I call them bleeding pests..they are usually middle class guilt ridden unwashed pretend reds."

"NONE OF THEM WERE LATE FOR WORK THEN? QUITE A FEW LOOK AS THOUGH THEY ARE ALLERGIC TO SOAP AND WATER..."

Now you, like others, may have previously thought that the people protesting at Stansted were filthy work-shy hippies, or perhaps middle class posers, but today it turns out that they're actually idle rich:

THOUSANDS of ordinary families faced airport hell yesterday — as well-heeled youngsters blockaded Stansted’s runway in a demo over climate change. The protesters — whose Plane Stupid campaign counts sons and daughters of peers among activists — chained themselves together to halt flights... Adam May, 24, from Clapham, South London, whose flight to meet his girlfriend in Berlin was scuppered, raged: “It makes no sense. They should be banged up.”

In a clear attempt to paint the Stansted protestors in as negative a light as possible and set readers against them, the Sun's editor (who does very nicely for herself on overseas holidays, thank you very much) flexes her working class cred and brings us some completely irrelevant information about the alleged upper-class status of maybe 5 of the 57 protestors... plus a report from a war zone where "gun police" stand between us and chaos some bloke at the airport who, apparently, speaks for everybody.

Stepping quickly through yet another diversion into the discussion pages...

"The demonstrators don't seem to have realised that keeping planes up there waiting to land, or diverting them, simply burns more and more fuel... "

... we arrive safely at a very similar opinion to the one above, only this time on Page 3: 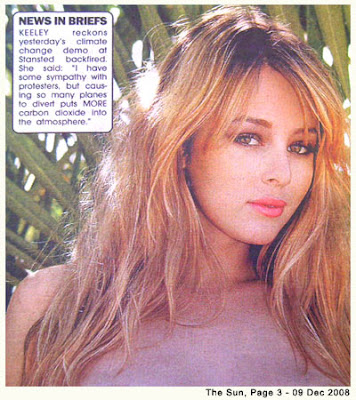 "I have some sympathy for the protestors, but causing so many planes to divert puts MORE carbon dioxide into the atmosphere."

1. Fifty scheduled services (to places much further away than the nearest airport) were cancelled yesterday, so unless Keeley has some clever sums to back it up, this assertion stands on very, very shaky ground.

2. A clearly stated aim of the protestors was the immediate prevention of "the release of thousands of tonnes of greenhouse gas emissions into the atmosphere," but the act was also meant to highlight our cheap flight culture and its contribution to carbon emissions. One has to admire the brutal efficiency of Keeley undermining that legacy by the very act of discounting it.

That is, of course, to assume that this is actually Keeley Hazell's opinion we're talking about here. How these opinions manage to arrive on Page 3 and remain unfailingly in line with those of the editor is one of life's great mysteries, and several possibilities are open to us:

- Keeley arrived at this earnestly-held opinion all by herself and offered it unprompted when invited by Rebekah Wade to express an opinion on Page 3.

- Keeley offered a deliberate and disguised attempt to undermine the work of protestors when invited by Rebekah Wade to express an opinion on Page 3.

- Keeley read the comment about diversions and the related fuel consumption (posted to the Sun discussion boards by 'Cannydc' at 07:42 yesterday), found herself agreeing with it, and offered it as her own when invited by Rebekah Wade to express an opinion on Page 3.

- In a shock development likely to make the Andrew Gilligan saga look like a schoolyard folly, Keeley turns out to be 'Cannydc', a male civil servant from Norwich City.

- Keeley has allowed herself to be coerced into a minor role in a mild character assassination.

-
(Psst! There have been similar mysteries popping up like pert nipples recently, with a range of Page 3 lovelies expressing their opinion about specific measures to do with the economy. We are at present allowing these to quietly accumulate.)