In the latest issue of the Sun, we are told that Keeley (21, from Bromley) "can't wait for boffins to turn on the Large Hadron Collider today," and we are assured that she said the following (no doubt unprompted, while an assistant was busy powdering her nose and tweaking her nipples);

"It's so exciting. The machine's main purpose is to explore the validity and limitations of the current theoretical picture of particle physics." 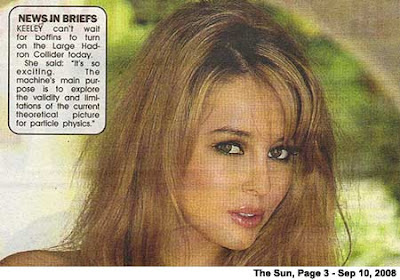 Perhaps this is someone's idea of a harmless little joke, but for that joke to be funny, one would need to live in a reality where Keeley is but a simple girl who does not bother her head with such things.

If this were the case, surely it would undermine Keeley's previously-stated positions on subjects as serious and as complex as immigration statistics and their impact on social order... 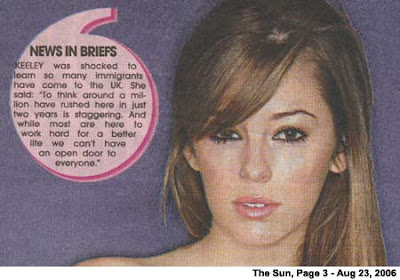 ... the budget and its political implications... 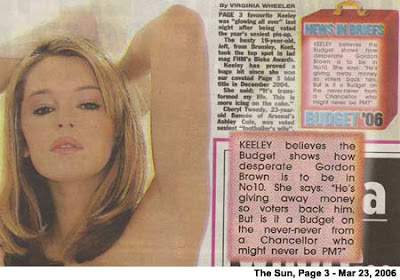 ... and the impact of recent scientific breakthroughs on the abortion rate: 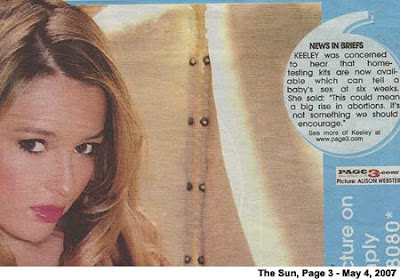 Or it could simply be the case of Rebekah Wade putting words into the mouths of women she claims to empower, which would be an entirely different kettle of fish and bicycles.

If they were truly empowered, it would be the Page 3 girl's opinion that appears on Page 3, and not the editor's, and that does not appear to be the case most days.

But let's say for argument's sake that it went down like this:

WADE: Hello, dahling. We're running photos from your most recent shoot as tomorrow's Page 3, and I wanted to know if you had anything you would like to say for 'News in Briefs'.

KEELEY: Oh, I'd like to comment on the Large Hadron Collider, please. I can't wait for the boffins to turn it on. It's so exciting.

WADE: Good choice. We'll happily feature that. They say it will create a black hole and destroy all life as we know it. What's your take on that?

KEELEY: Well, the machine's main purpose is to explore the validity and limitations of the current theoretical picture of particle physics, an*....

Damn and blast it, did you see what I did there?

I only went and closed the scene without an unexpected dramatic twist!

(We apologise for any disruption to the above image. There appears to be something fundamentally wrong with the universe today.)
Posted by Tim at 3:40:00 pm

Is this a regional thing? She's pleased with Victoria Beckham's new haircut in my copy (Birmingham)

It sounds like it's a regional thing today, Tom. Perhaps Rebekah thought the boffin wheeze too sophisticated for the working clarses.

Would you mind scanning your copy and sending it my way?

Does anybody else have a different version elsewhere in this great nation?

Yeah, the London edition that is floating round the office here has the rubbish about Posh's new barnet. It may well be an edition thing? Perhaps the sub-editor was taking the piss and they only noticed after the first print run?

They have used Keeley before for more pressing matters such as getting her to walk around in a niqab to see what it's like (she unsurprisingly preferred not to). On a more aesthetic note, her popularity has always puzzled me: she has the face of a child and her breasts look better covered up, but then maybe that's why the Sun likes her so much.

Toby: Or perhaps they ran with Posh for the later additions just in case anything went horribly wrong with the Large Hadron Collider.

That way, they wouldn't look foolish *and* everyone would be so busy thinking about Posh's new 'do' that they wouldn't care about the end of the world. Or something.

(Or maybe they only do this in Guildford, specifically to wind me up. Dun-dun-dahhhh!)

Septicisle: "she has the face of a child"

Doesn't she just? Mixed messages from Wade, the rabid paedo-hunter.

I remember back in the 90s one of the page 3 girls being concerned about the Bundesbank's overly tight monetary policy.

Is this pedlo slang for something unmentionable? I think we should be told.

Not that I'm insinuating anything, mind you.

Oh, heavens no. It simply wouldn't do to suggest that Paul Staines is the kind of a man who would hang around school playgrounds and offer to show children his puppies. Even when drunk.

[For those who came in late: Paul 'Guido' Staines allows anonymous/personal attacks on his website when it suits him and also appears to think that making paedo jokes about Mark Oaten equates to a hint that he is gay. Being gay does not make you a paedophile any more than being an alcoholic does. Staines' apparent homophobia is just the kind of thing that Rebekah Wade the Paedo-Hunter General capitalises on when she screams for mob justice, and he's the epitome of lying tabloid scum himself, but we are off-topic now, so it might be best if we all got back to admiring Keeley's mighty brain.]

My office think the universe blinked out and there are now two parallel Earths running alongside each other, but just slightly out of phase.

The only tell-tall signs so far appear to be England can suddenly win matches (and has a striker [Wallcott] who doesn't speak like a knuckle-dragging ingrate), Margaret Thatcher was never a prime minister but is a pretty impressive pole dancer in Swindon and Keely's comments on either Victoria's haircut or the supercollider.

So, depending on which universe you're now in, you get either the barnet comment or the LHC comment.

Actually, have you noticed the quotes mostly support reactionary policies? "Abortion is bad".

Playboy does the same thing. People remember things better when they are emotional. So, men who're turned on by images remember the accompanying text, and their opinions are influenced by this.

It's not like they're going to turn around and quote page 3. It just works the same as 'coke is it'. You just know you prefer Coke, and don't think much about why.

So you can see why they're reluctant to get rid of something that works so effectively at so many levels -- keeps women in their place, re-harms women, trains men to think of women as lesser, and *bonus* can push other opinions and ideas into the aroused brains of male readers.