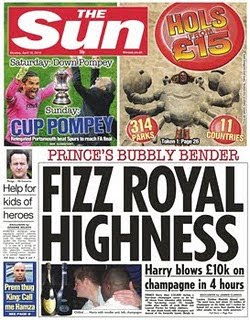 (Major hat-tip to Tabloid Watch on this.)

It's always amusing when such a banal front page falls apart within the space of an entire day, as happened to yesterday's super splash claiming that Prince Harry had spent £10,000 on champagne in just 4 hours. There really isn't any excuse for it, either: St James' Palace is always fairly open with the press, but they balance this with being very quick to correct inaccuracies, as they have in this case:

"Prince Harry spent approximately an hour and-a-half at the nightclub, where he enjoyed a bottle of beer and a glass of champagne. Prince Harry did not buy anyone else any drinks.

"A friend of Prince Harry hosted the entire evening. It is not true to suggest that Prince Harry spent large sums of money at the club. The £10,000 figure is nonsense."

In other words, if Harry did provide others in the nightclub with drinks, or were at least under the impression that he had, they were most likely being paid for by his friend and not by him.

The Sun has attempted to cover this in the usual fashion: by making up quotes from "friends":

But one chum close to the Prince said: "Harry is very much the the (sic) life and soul of the party so it's easy for people to think that he's getting the drinks in - especially after they have had a few themselves.

"Harry had a good time - but clearly it wasn't as lively as that of the group he met. He's saving the partying for once he passes his training."

Still, not a bad way to follow-up a completely inaccurate front page story - by dumping the "clarification" back on page 19.
Posted by septicisle at 10:17:00 pm